I like the fixed camera angles on this game but I have noticed that the other 2 games are more slashers when compared to this one.

Exactly, the mechanics evolve as the protagonist grows

Of course, I like it a lot too, I have a project with fixed cameras and ps1 stylein work , I'm glad you liked it

Thank you Reve Voodoo for making such an interesting game. If you could please share this video out as it helps YouTube's algorithm in sharing it to more people on it's site. I can't wait to play the other parts of this game.

Thenks to you for play,of course guy*___+

Thanks my friend.  I am off to play the second one :D

"Zoe adopted at age 5, sold to a villa to relieve millionaire men seeking intimacy with young girls. Captive ever since, Zoe turned 9, and once again she and 15 other girls who live with her were abused. She receives, in her dreams, a visit from a spirit that shows her (porqué mudasteis de sujeto?) an entire outside world that is being lost (or "is dying")."

I did it for the sport.

I think "is being lost" should probably be "she is missing" (I believe she's the subject of "se está perdiendo").

I agree about the subject change sounding a little off. "que le muestra" might be a better choice ("that shows her").

No, actually, I'm pretty sure it's the world that's being lost. Should she be the subject, do you think she's missing the world? As in missing out? I guess it could be, but that's not how it came across to me.

I think what motivates her to get out is to go to a better place. Unless she's out for revenge against a corrupted world, helping the spirit more than herself.

In this case, English conveys the intended meaning and maybe the Spanish version could use a little fix. "Perdiendo" where? In what?

I don't mean to be dense (sorry if I come off that way), I just enjoy analyzing meanings. Since we both seem to know Spanish and understood it differently, I think we can agree that it isn't entirely clear.

Zoe's story continues in Dismember mind 2 and 3, as for the translation, don't give it a second thought, it is simply translated automatically and there may be both grammatical errors and the concept itself, even so, I appreciate the analysis, and that even there are people playing it *__+

I guessed as much, but I thought you might want to use a more polished translation. I couldn't help myself, coz that's what I do, but it's not really important.

Preety solid game! I like the eerie music, the graphics and the idea in general. It would be awesome if it had some kind of AI for the enemies, they're mainly just there waiting to be killed, also some camera angles feel a little weird and hard to navigate. But it's a great game!

I'm glad you like it, those problems are half fixed in the second and third part, but thank you very much for playing it budy °___•

What I got from this game:

Looking forward to more games from you!

(Will def be playing the sequel at some point!)

I'm glad you got so many apples, apples always like them, enjoy the sequel if you get to try it, thank you very much for playing it *__+

What a lovely young lady!

Hahaha thenks for play men, try the secuel, maybe you like it *___+

Hahaha thenks for play men, try the secuel, maybe you like it *___+

Past Kieren is following me around T.T

Getting closer every day. >:})

maybe the ending of the sequel is to your liking, try it if you want +___* (SPOILER)

she is not a devil, the spirit of a spiteful person helped him

i loved it, fortunately there is a 2nd game so here i go

I normally avoid revenge based horror due to the reality of it, but this game is very well put together. Nice work

Thanks for giving it the opportunity, it has a little bigger supernatural detail in each sequel, but it is still a thriller horror, I appreciate that you played it there  *___+

Thank you very much for playing it, if you liked it, try the second part *___+

Reply
Gaming with Benn1 year ago(+1)

Dismember Mind is so amazing, i love it and i'm already waiting for Part 3 😍

seriously can't wait to play episode 2 of this. You've got my curiosity peaked!

thenks men ,you curiosity is honor for me +___*

Once again, thank you for making this awesome atmospheric, intense, and emotional game! Very well put together!

with pleasure friend, thanks to you for playing it *____+

Thanks so much again! I'm going to check out the 2nd one in the future!

If you record it I would like to see it, I hope you enjoy it bro

That means so much to me! I l already know I will enjoy it!

I really liked this! The ambiance plus the story of this game go together really well and i wasnt expecting the ending! Im most likely going to play the sequel on the channel too! Heres my playthrough if you wanna see.

Reply
SnickerDudeAl1 year ago(+1)
WILL BE PLAYING DISMEMBER MIND 2, THIS IS MY BREAD AND BUTTER SURVIVAL HORROR
Reply
ReveVoodoo1 year ago

enjoy it friend, and thank you very much for playing them *____+

this game really surprised me . Really fun to play

Reply
Calamitycalling1 year ago(+1)
This game was DARK!

I enjoyed playing it, but I definitely had to go find some soft and fluffy things after 😅

hahaha when I finished I had to tell my mother that I loved her, thank you very much for playing it * __ + 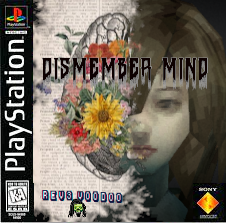 Reply
Sly1 year ago(+1)
The Ending Was Great To See Them Safe!! ReveVooDoo This One Was Some Heat!
Reply
ReveVoodoo1 year ago(+1)

if the ending is bittersweet hahaha, thanks for playing * ___ +

Reply
LadyAsuka1 year ago(+1)
This certainly was a shocking game to play. It was uncomfortable to play because of the topic. I made a video showing my uneasiness. Overall, it is not a bad game. Thanks for the game, Developer.
Reply
ReveVoodoo1 year ago

Thank you very much for playing it, I appreciate that even though the situation was uncomfortable, it was played there, the game is only horror for that situation

It is an .exe, from windows with double click it should work

Reply
bee12331 year ago(+1)
Interesting to see a horror story taken in a new and interesting direction, disturbingly dark and twisted but a new direction none the less.

Every aspect of the game was really great and I loved you could switch between ps1,2,3, graphics but the think what really stood out to me was how solid you got the movement down. The part I hated most about old school horror was the woonky movement.

There were a few bugs I ran into with the camera blind spots but I had more trouble with the doors. You can get stuck behind some doors if you close them while you are inside and a couple of the doors can be opened into the wall and if you try to close them you will get stuck and the game will freeze. Also would be nice to have a pause button hitting escape takes you to the menu and I couldnt close it without restarting the game.

All in All solid 8/10!
Reply
ReveVoodoo1 year ago

I appreciate your review, I already saw it in your video, it has several problems, I am not very good at selecting the cameras, even so it improves from other titles, in Dismember mind 2 it will be third person, much more comfortable for everyone hahaha thank you very much for playing it * __ +

Thank you for making it! I think you should stick with the cameras though just tweak the placement!

oh yes, in this one it is only to fix it, I was referring to the second part, as Zoe is more Mallor the player will have a more precise control and camera, thanks for the interest friend

Talk about brutal. At least it was done somewhat tastefully and not over the top like in some of the Mortal Kombat Fatalities. Other then that, really dark game. Nice job on that.

Here's my channel for other games I have played. http://www.youtube.com/c/Levont

I'm glad you like it, thanks for playing it, I think you played some necromage before, from the first few ,thanks for that too hahaha

Reply
Lady Random1 year ago(+1)
The story content was disturbing but, I think you handled it well. My favorite parts are the graphics and kills. Only issue I had was the camera angles causing me to get stuck in a few places. Otherwise, this is a good game and I enjoyed my playthrough.
Reply
ReveVoodoo1 year ago(+1)

true, some blind spots, my mistake, in the second part it will be in third person, and thank you very much for play +___*

hahah yes,is the universal tool for pederastians,thenks for play *___+

It was a really good game, with a dark story, but I'm glad it ended well.

Check the second when it comes out bro, and thank you very much for playing it * ___ +

Reply
BrandyBoyPlays1 year ago(+1)
Please check my playthrough out!!!

Very disturbing game which has a very creepy atmosphere, very well made though, only play if you can handle very dark triggering things!

do not suffer I always watch the gameplays, thank you very much for playing it buddy,yas,the story is sensitive

This game was so fun to play! Definitely recommend others to try

Yas bbro, there will be no peace for the wicked hahaha,theenks for play

An interesting horror game, with good influences from the PS1 era and with a strong message. Kudos to that.

Thank you very much for playing it, the message is strong, but I had to say it hahaha

Reply
BetaHunter1 year ago(+1)
Damn, this game was cool!

The graphics and use of audio was good, but the best part was the environment, as it tells a story whiteout actual notes or narration!

The camera angles could use a little improvement, and it would often be nice if the camera would switch a little sooner and perhaps with a smooth rather than sudden move.

I also very much liked the ending, which set up more thanh just a psycho girl!

I appreciate the review, I'm still learning the art of still cameras, silen hill in general is an art hahaha, Dismember mind 2 will be in the third person, and thanks for playing it budy *___+

Awesome and smart little Game. With a big Message. Love it.

Reply
ItsWilsonGames1 year ago
That was amazing. It was so messed up but so fun! Great job!
Reply
ReveVoodoo1 year ago